Join the MINA revolution and help keep a girl child in school. 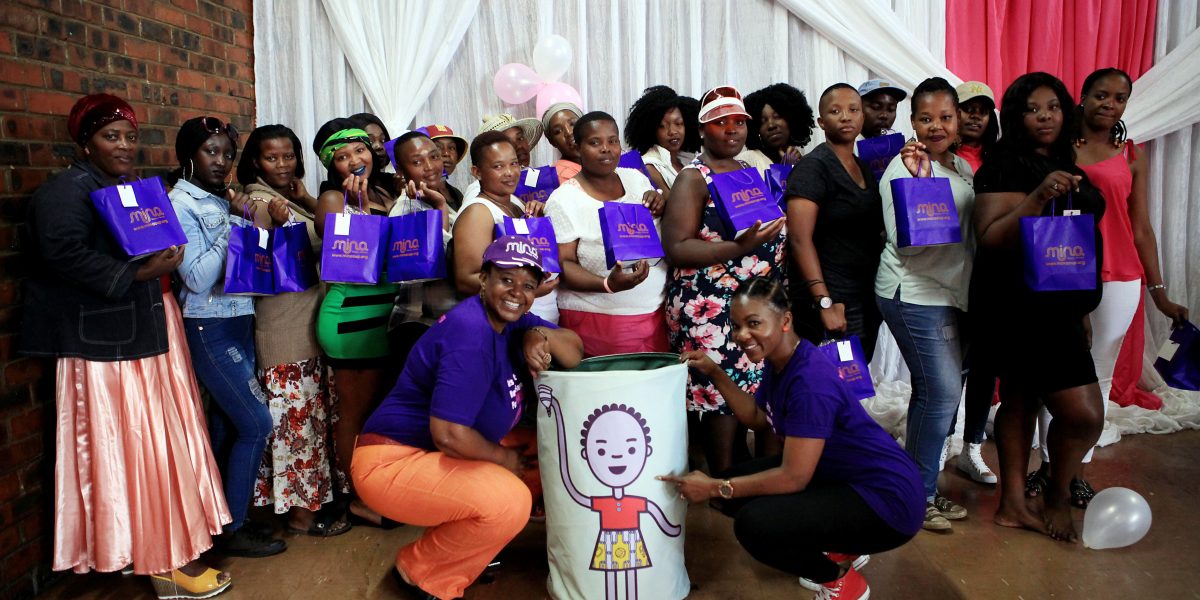 MINA brings the action to Ekurhuleni through Global Citizen

Johannesburg – Wednesday, 24th October over 400 people gathered in the Ekurhuleni community, filled & ignited the Tsholo Hall in their pink and white attire for a fun filled, educational and inspirational day, alongside a counted number of men who attended.

Tiyang Basadi, in collaboration with the Mina Foundation held a successful event in Katlehong, Ekurhuleni in partnership with the Department of Health and the Department of Social Development. Founded in 2005, Tiyang Basadi is a Non-profit organisation that focuses on the empowerment and welfare of women, hence the name of the organisation which translates to “Be strong, women”.

The organisation is led by Florence Malinga as Chairperson and Albertina Pebetsi as Project Manager, together with several women who form part of the Board as well as more women volunteers within the organisation to complete the team. In a much similar stance, the Mina Foundation was founded by three dynamic women with the aim to empower young girls becoming women by ensuring that they continue to attend school without interruption during their menstruation days by using the Mina menstrual cup as a safe, eco- friendly and hygienic alternative. 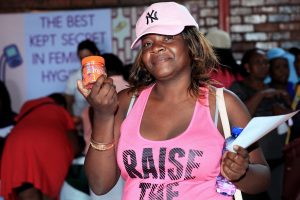 The Mina Foundation highlighted various SDG’s, namely, Health, Environment and Women and Gender Equality through a “educate to win” campaign by encouraging the community to take action. Health Representatives from each organisation addressed Sustainable Development Goals relevant to their work. Tiyang Basadi highlighted cancer awareness, hence the colour scheme of the day which represented breast cancer month awareness. Other health issues such as HIV/AIDS, Diabetes, High/Low Blood pressure were discussed and nurses from Motsamai Clinic were stationed on-site to carry out various health tests.

Tiyang Basadi addressed women and children and allowed them time and a platform to share their experiences of victimisation and survival to encourage others to battle their circumstances. Seipati Mosokoane, Head of Training and Facilitation at the Mina Foundation addressed Health and the Environment by presenting and discussing the Mina cup and the benefits thereof.

There was a beautiful element of surprise at the event where 20 x double tickets to the Global Citizen Festival were given away. Those in the 18-35 year category, who opted to try a complementary Mina menstrual cup were entered into the draw as one of the actions taken highlighting the Environment, Health and Water and Sanitation.

Throughout the day, people streamed through the gates of Tsholo Hall to be part of this enlightening event and partaking in health sustainability.

Guests were entertained by the sweet harmonies of the Tiyang Basadi Choir. The last order of the day was quite a surprise for the guests provided by the Mina Foundation. The foundation has had the honour of working with Global Citizen, an advocacy organisation which aims to help end poverty by 2030.  recently as one of the NGO’s official partners, regarding its upcoming concert, Global Citizen Festival: Mandela 100, in South Africa on December 2nd, 2018 taking place at FNB Stadium, Johannesburg. 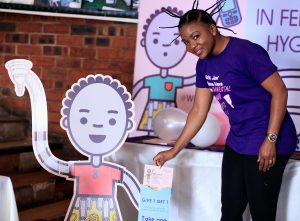 Much to the success of the partnership, Mina was required to provide a platform for a disadvantaged community of their choice, where individuals would partake in an action in several SDG’s to stand a chance of earning tickets to this once in a lifetime opportunity.

The euphoria of the winners roared in the streets and left all the winners grateful and speechless in disbelief. Busisiwe Mbatha, one of the winners said “I am so excited to see Beyoncé, and never thought that something like this could happen to me. I am grateful for this opportunity, made possible by Global Citizen and Mina” adds Busisiwe. A superb time was had by all the guests and the winners are looking forward to attending the festival.

Since the first Global Citizen Festival in New York in 2012, Global Citizen has grown into one of the largest, most visible platforms for people around the world calling on world leaders to honour their responsibilities in achieving the United Nations Sustainable Development Goals and ending extreme poverty by 2030.

Since the first Global Citizen Festival in New York in 2012, Global Citizen has grown into one of the largest, most visible platforms for young people around the world calling on world leaders to honour their responsibilities in achieving the United Nations Sustainable Development Goals and ending extreme poverty by 2030. Global Citizens have generated commitments and policy announcements from leaders valued at over $37.9 billion that are set to affect the lives of more than 2.25 billion people. The organization has taken its action-based model to Australia, India, the United Kingdom, Germany, Belgium, and Canada, and created a platform for activists to learn about the issues they care most about, take action, and earn rewards for doing so.

ABOUT THE MOTSEPE FOUNDATION

The Motsepe Foundation is an NPO (Non-Profit Organization) started in 1999 by founder, Mr Patrice Motsepe and co-founder Dr Precious Moloi-Motsepe. The Motsepe Foundation is committed to the upliftment of the poor and marginalised people, through projects and initiatives that assist its beneficiaries to become self-sustaining and independent. The Motsepe Foundation has over many years initiated and supported projects in education, the provision of skills and expertise, health, research on HIV/AIDS, sports, partnerships with religious and faith based organisations and traditional leaders, wildlife and environmental conservation.

The Motsepe family became the first family on the African continent to join ‘The Giving Pledge’ – a global philanthropic campaign that was started by Bill and Melinda Gates and Warren Buffet. by Warren Buffet, Bill and Melinda Gates.  Members of the Giving Pledge are committed to giving half of their wealth to the poor and marginalized through various philanthropic initiatives.

The Motsepe Foundation works in partnership with various respected and reputable global philanthropic and charitable organisations and is also one of the original “champion” donors that was initiated by the Nelson Mandela Foundation. 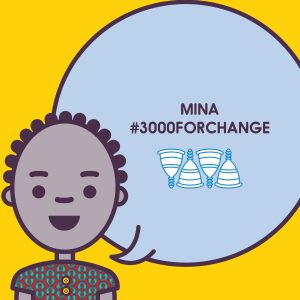